Summer 1981 :
In co-production with Antenne 2, Nicole Vitel and François Durantel shoot LES OUBLIES DE L’ALTIPLANO on the Bolivian Altiplano and in high-altitude mining regions. This feature length film is the prelude to the creation of the Association AUX 4 COINS DU MONDE.

Summer 1981 :
Groundbreaking and laying of the first stone of the school of Lekepampa, in the Aymara Indian community of Huarichulpala (Bolivia).

Summer 1985 :
filming of LETTRE DE BOLIVIE, a short film about the Lekepampa school and its students. This film won the first Agena Trophy for best short film awarded during the International Forum for Voluntary Cooperation of Agen.

December 1985 :
The future head office on rue Mi-Carême in Saint-Etienne is open with a permanent exhibition and sale of Latin American crafts. In the spring of 1986, A4CM organized its first major exhibition in France, the Altarpieces of the Jimenez family.

A4CM commits to fair trade, opening a shop on rue Mi-Carême in Saint-Étienne; this shop will be completely refurbished in February 1992.

1992 :
– celebrations for the 5th centenary of Latin America
– creation of the “socios” membership of A4CM (monthly donation by direct debit) specifically involved in the association’s development programs.

October 10, 1994 : A4CM gains the french “charitable” status (“association de Bienfaisance”) and is so authorized to benefit from the provisions of the second paragraph of article 238 bis of the French Tax Code provided for by the law of July 23, 1987 on the development of patronage concerning tax deductions in matters of donations.

Summer 1997 :
A4CM is launching a major investment program in La Talaudière (42) with the construction of a 160 m2 business premises including a 4 m high depot, a craft packaging workshop and a meeting room.

September 28, 2001 : inauguration of the renovated and improved shop premises in Lyon-Croix-Rousse.

October 2001 : Inauguration of a new shop on rue Gambetta, in Saint-Etienne. The boutique on rue Mi-Carême continued to operate until December 31, 2001.

February 8, 2002 : official inauguration of the store on rue Gambetta which becomes the association’s current headquarters. 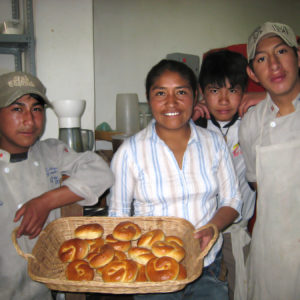 2009-2010 :
The introduction of barcoding allows precise management of stock and movements between the La Talaudière depot and the shops.

2017 :
Complete overhaul of the A4CM website and its IT tools for stock management.